Link to Obituary from Philly.com 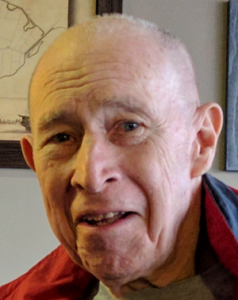 Age 88 of Haddonfield
Died Monday, May 29, 2017 from complications of Alzheimer’s Disease.
He was born to Lavenia Skeggs Taylor and S. Herbert Taylor and is survived by his wife of 66 years, Helga Nepple Taylor. He is also survived by his sons, Jeffrey P. (Pat) of Burlington, NJ and James D. of Haddonfield, NJ, his daughter, Anne Taylor Connor (Ben) of Collingswood, NJ, his grandsons, Michael (Chrissy) Taylor of West Berlin, NJ, Adam Taylor of Medford, NJ, Will (Christine) Taylor of Summerville, SC, Joseph Connor of Collingswood, NJ, 2 granddaughters, Aurora Connor of Seattle, WA and Fiona Connor of Arcata, CA and 2 great grandsons, Lucas and Jeffrey Taylor of Summerville, SC. He also is survived by a brother, David L. Taylor of Medford, NJ.
He was a native of Pennsauken and attended Pennsauken and Merchantville schools where he was captain of the championship swim team and played bass in the Blue Serenaders, a local swing band. With his brother, David, he also worked as a lifeguard in Wildwood Crest. He obtained his bachelor of science degree in Civil Engineering from Princeton University in 1950, after which he enlisted in the Navy as an Engineering Officer on a destroyer escort during the Korean conflict. In 1952, after completing his tour in the service, he joined his brother David and father Herbert at the engineering firm of Sherman, Taylor and Sleeper. He also started night school and received his masters in Civil Engineering /Urban Planning in 1956 from the University of Pennsylvania. He obtained his Professional Engineering, Land Surveying and Planning Licenses. He and his brother became executives and principals of the engineering firm which evolved into Taylor Wiseman Taylor. At the time of Bill’s retirement in 1981, he was president of the firm.
He was a member and fellow of the American Society of Civil Engineers, New Jersey Society of Professional Engineers, American Consulting Engineering Council, New Jersey Society of Professional Land Surveyors, New Jersey Society of Municipal Engineers, the Water Pollution Control Federation, the American Water Works Association, the Water Resources Association, U.S. Naval Institute and the Advisory Board of Widener University.
He served as Burlington City, NJ engineer for 22 years and oversaw all the urban planning and engineering design services that resulted in a major redevelopment and historic restoration of the City. He was a leader in the development of Southern New Jersey, including the Route 295 and Route 55 corridors and numerous housing and commercial communities.
Bill was early to understand the importance of the environment and helped preserve thousands of acres of open space.
He was an American Society of Civil Engineers District Director and Chairman from 1978-1984 and National Vice-President of the American Society of Civil Engineers. He was a Proprietor of West New Jersey and served as the 12th Surveyor General of West New Jersey for 48 years, a record term of service of which he was very proud.
He was Chairman of the Haddonfield Planning Board and worked with others to create the Historic District Ordinance for Haddonfield. He was also Director and President of the Southern New Jersey Development Council, Director of the NJ Alliance for Action, Director and President of the Guidance Center of Camden County, Board Member and Facilities Chairman of Cooper Hospital, Director of Fidelity Mutual Savings and Loan Association and Director and President of Indigo Association, Ltd.
Bill had many hobbies that included scuba diving, sailing, swimming, hiking with Helga throughout the United States and Europe, biking and cross-country skiing. He also rehabbed several homes at the Jersey shore, designed and built a home in the British Virgin Islands, a floating porch boat on the Nacote Creek in Port Republic, a barn and various additions to friends’ homes. He loved model trains and designed a very elaborate train layout for his home. He was passionate about current events, loved a good political debate and was an early supporter of Senator Bill Bradley.
Funeral services will be private. Contributions in his memory can be made to Planned Parenthood of Northern, Central and Southern New Jersey, 196 Speedwell Road, Morristown, NJ 07960 or the Alzheimer’s Association at www.alz.org.
With Bill’s wide interests, he was a true renaissance man. Generous, hospitable and larger than life, he cherished his broad and varied circle of friends.